codinggeekette, or Sarah Dutkiewicz and her husband introduced me to Linux and Open Source many years ago.  Running counter-culture is the genius that is @sadukie, so now she’s a Microsoft MVP.  We’ll forgive her that, since she does crazy stuff like setting up .net environments on Linux and other fun stuff.  Anyway, Sarah has a post on phone apps she likes and has proposed in her post (quasi) simu-blogging on the topic.  I’ll bite.  I’ll focus mine on the limited mapping apps I have on my iPod, since my smartphone solution is an iPod touch and a Motorola flip phone. 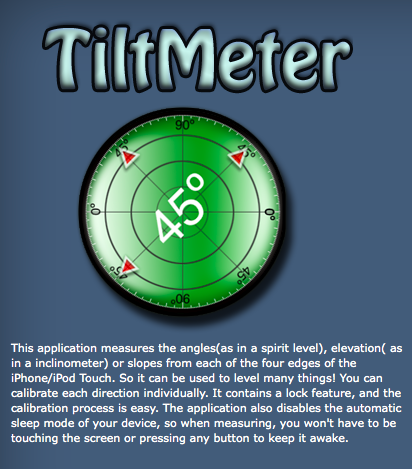 Tiltmeter is simply that– it logs at a specified interval the 2D axis tilt of your iPod or iPhone, and can show that visually or e-mail the log to you.  Oh, where were you Tiltmeter, when I was building camera arrays, putting bandpass filters on them, and launching them on a 12-foot balloon.

It was a low cost, few band, hyperspectral attempt at calculating red-edge effects for productivity estimations.  A very early attempt at something similar to Grassroots Mapping.  Let’s just say, a tiltmeter would have really made the georeferencing easier… .

App number B: Ride the City.

Ride the city is a very nice point-to-point routing solution for a desktop or mobile client.  It’s a discreet app on the mobile side.  Other than not doing looped (recreational) mapping support, it’s a pretty cool application.  Great for commuter bicycling.

PDF Maps is a tool from Avenza Systems for viewing Geo PDFs.  I’ll confess, since I have an iPod touch, and therefore no GPS, I haven’t run this one through the ringer (and there are other likely choices), but it could be a really useful tool in concert, e.g., with the Geo PDFs from the USGS.

One thought on “There’s an App for That, Alternate”