Let’s ignore for a moment the drone hobbiest / enthusiast. What is the shape of airspace for airplanes and commercial and government unmanned aircraft flying under Certificates of Authorization, and how can we visualize it?

Thanks to Anita in the last post, we have the Class B,C,D,E Airspace Shape Files which helps us define the overall shape of controlled airspace.

But, these are 3D things. I want to visualize them thus. Let us put some constraints on the problem. Let’s do it all in PostGIS, that way we can see it in QGIS or on the web. Let’s not use full PostGIS 3D (i.e. the SFCGAL library), not because it isn’t awesome (it truly is) but because it can be hard to install at the moment (although see https://github.com/vpicavet/docker-pggis for an easy way with docker). Finally, true 3D with unconstrained viewing angles and 100% flexibility is… is… well it usually sucks. So, we’ll stick to isometric viewing (thanks to Seth Fitzsimmons of Stamen http://stamen.com/ for his PostGIS isometric code. (Update — all the code is there…):

Ok, now let’s rock some geometries with this bad function:

Kind of conical, in this case with some “wings” that serve as approaches. It makes sense, I guess. At the center, where the airport is, controlled airspace goes from the ground up. As we get further from the airport, a set of concentric rings starting at higher elevations provide a controlled space that allows for landing and taking off.

There are more complicated ones, naturally. We need look no further than Detroit for additional complexity: 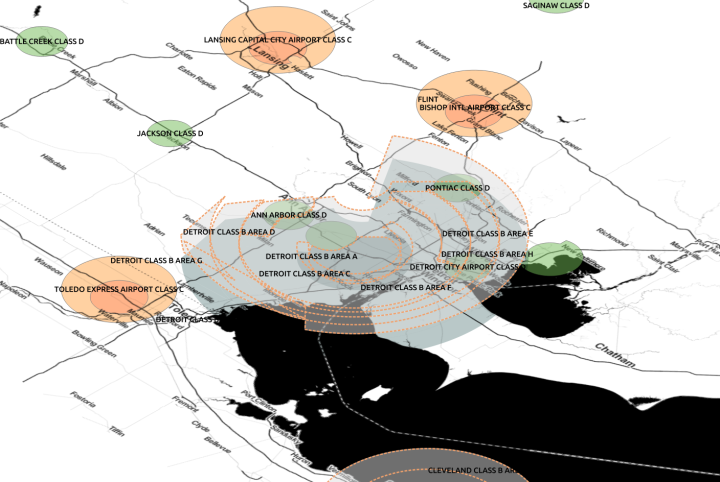 No wonder every time I fly through Detroit, no matter where I’m going, I end up flying over Lake Erie.

If we want really complicated, we need look no further than Cincinnati: 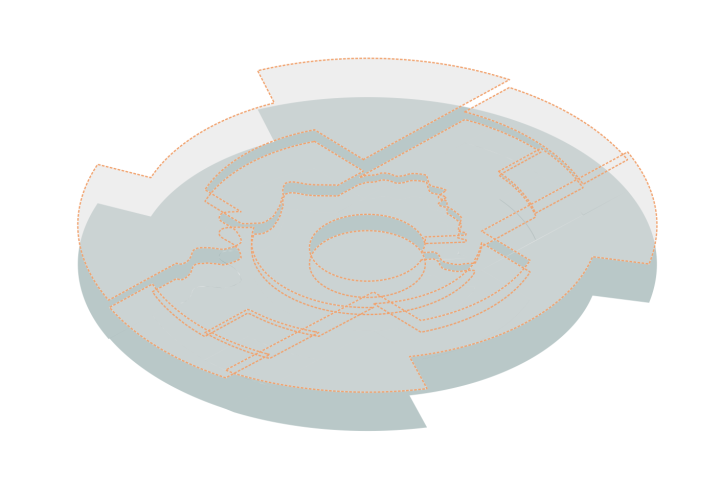 What is going on there? Is that due to shape of the hills, or city boundaries?

Finally, what does airspace look like over Ohio, West Virginia, and Pennsylvania (etc.), overall? 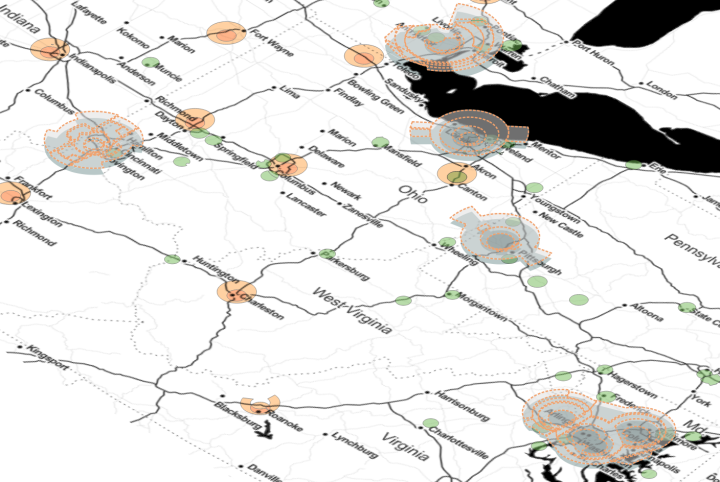 And while the following map isn’t quite right, here is a figure including many of the small airports sans controlled airspace:

The above line was not intended in bad taste, but just an homage to the “red dot fever” of early neo-geography (neo-geography which I’m informed definitionally doesn’t exist). Only a few minutes ago, it dawned on me that the deleted phrase could be misinterpreted these days… .

On a related note, if you want an interesting analysis of ebola, read Zeynep Tufekci’s analysis.

(for the record, all heights are exagerated by 5x, for clarity of reading).

Also, in case it wasn’t obvious: Map tiles by Stamen Design, under CC BY 3.0. Data by OpenStreetMap, under ODbL.